VWV Associate Kai von Pahlen has recently been appointed as Honorary Consul for Germany in Bristol, Somerset and Gloucestershire, by the German Ambassador to the UK, His Excellency Andreas Michaelis. 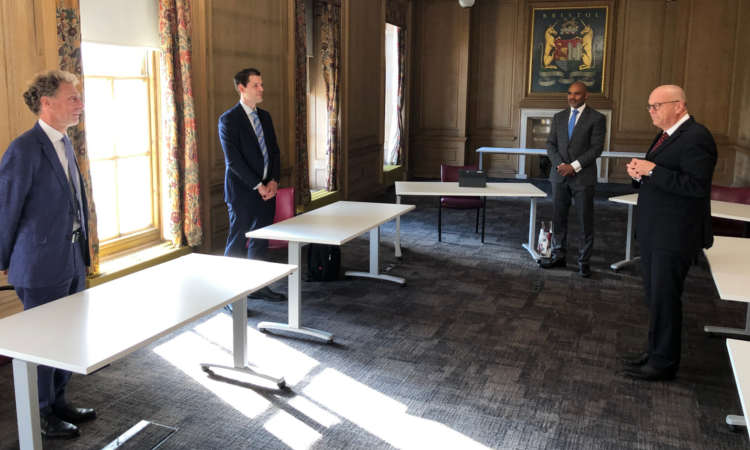 At a socially distanced appointment ceremony, Kai was joined by Marvin Rees (Mayor of Bristol) and Tim Illston (former Honorary Consul for Germany), when the Ambassador announced Kai's appointment.

German Honorary Consuls are volunteers who are well connected in the community and offer valuable representation and assistance to German citizens, including in emergency situations. They also play a role in developing and maintaining British-German cooperation and friendship in fields such as trade, economy, culture and science.

Kai was born in Hamburg, but studied law in the UK. He is bilingual in English/German and experienced in advising on cross-border issues through his work as a Construction & Engineering Associate at VWV. He also already holds an impressive list of honorary appointments, having previously served as the regional head of the British Chamber of Commerce in Germany and of Junior Chamber International. Kai also currently serves as a committee member of the Bristol Hannover Council, which represents a British-German twinning relationship that goes back to 1947.

Kai commented on his appointment: "It is a great privilege to accept this appointment as Honorary Consul for Germany. It was an absolute pleasure to take over this role from Tim, and to meet Mayor Rees and HE Ambassador Michaelis. Particularly in the current climate, I look forward to looking after German citizens in my area and helping to maintain friendship and cooperation between the UK and Germany."